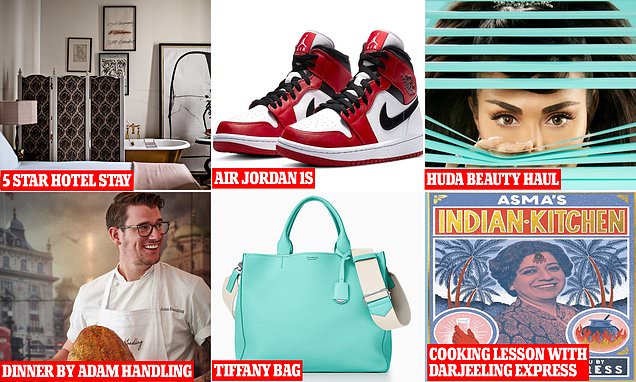 By Bridie Pearson-jones For Mailonline

A night at one of London’s most luxurious hotels that’s built on the site of the famous Bow Street court is among the many lavish lots up for sale in a charity auction that ends tonight.

The winner of one lot will be among the first guests to spend the night at new NoMad Hotel, in a Superior King Guestroom.

The package includes breakfast for two, as well as a private tour of the Bow Street Police Museum located underneath the hotel.

What is up for grabs at the auction?

Bow Street was one of the UK’s most famous magistrates courts before it closed it’s doors in 2006 when it was developed into a luxury hotel.

Charles Dickens worked in the court as a reporter, while the Kray Twins, Jeffrey Archer, Oscar Wilde and Emmeline and Christabel Pankhurst were all tried there.

But the hotel is a far cry from the grimy 19th Century docks the buildings once saw, with luxury interior design and rooms boasting marble mosiac walk-in showers, freestanding clawfoot bathtubs and even views of the Royal Opera House.

Among the other lots in the auction is a home delivered Christmas feast prepared by the superstar chef Adam handling of the Frog, and one-to-one cooking lessons with chefs Asma Khan of the newly opened Darjeeling Express, and Great British Menu’s Mark Greenaway who is currently hosting a residency at one of London’s most trendy pop-up The Gentlemen Baristas.

Products being auctioned include a leather Tiffany & Co Tiffany Blue tote with personalisation at the Covent Garden boutique, valued at more than £1000.

Vashi Connections will auction a personal experience, allowing the winner to be amongst the first to visit the jewellery brand’s new Covent Garden location next spring and spend time with a specialist maker to choose a piece from its Connections Collection worth up to £325.

Fashionista’s and beauty lovers can bid on a UK exclusive Huda Beauty haul as well as a  new collection Lulu Guinness handbags or a personal shopping experience and £250 voucher at Mulberry.

Eyewear designer Tom Davies is auctioning ready to wear sunglasses with ZEISS lenses and shoe store Galleria Melissa is auctioning a £150 voucher to spend at its Covent Garden store.

Foodies can also bid on £100 voucher to spend at vegan mecca byChloe, an afternoon tea set from The Gentlemen Baristas delivered to the door as well as £100 to spend at celeb hotspot the Lebanese bakery.

Also on offer is a pair of Air Jordans.

Dressed in the famous Chicago colours of red, white, black from Michael Jordan’s first ever signature shoe in 1985, this pair will no doubt have Jordan fans from around the world excited.

Worth over £550 The Jordan 1 Mid Chicago 2020 is the latest high-heat Jumpman released this year and is set to be one of the most popular.

Proceeds from the event will go to the charity A Pavement Away, which is working with Crisis, to purchase 1,800 thermal flasks that will allow homeless people to takeaway hot food and eat when they most need it.

Currently there are 8,855 registered rough sleepers in London and the campaign launching today by Covent Garden will hopefully help 1,800 of them this Christmas.

Covent Garden is aiming to raise more than £9,000 to help the charity.

What is the Bow Street Magistrates court and who passed through it?

One of Britain’s most famous legal addresses Bow Street Magistrates court  saw some of the country’s most famous criminals pass through its doors in 2006 bringing the end a 267-year legal history.

The court opened in 1881, has seen a host of famous names pass through its doors, including Oscar Wilde, Dr Crippen, the Kray Twins and Jeffrey Archer.

The dock was also stood in by suffragettes Emmeline and Christabel Pankhurst, in 1908 – when they were charged with involvement in incitement to ‘rush the House of Commons’ and jailed.

Charles Dickens, who regularly attended the court as a reporter, described its appearance in the 19th century.

‘There were other prisoners, boys of 10, as hardened in vice as men of 50; a household vagrant going joyfully to prison as a place of food and shelter, handcuffed to a man whose prospects were ruined, character lost and family rendered destitute by his first offence’

c1760 – Renowned womaniser Giacomo Casanova recalls in his memoirs that he appeared before magistrate Sir John Fielding at Bow Street charged with assaulting a prostitute, and was bound over to keep the peace.

1838 – In fiction, the Artful Dodger appears at the fore-runner of the current Bow Street court in Charles Dickens’ Oliver Twist, published in this year.

1895 – Oscar Wilde is in the dock after his arrest for ‘committing indecent acts’, and is eventually sentenced to two years’ hard labour.

A cartoon on the front page of Police News clearly shows the same dock still in court number one today.

1908 – Suffragettes Emmeline and Christabel Pankhurst – who were mother and daughter – and Flora Drummond face the so-called ‘Rush trial’ and are jailed for handing out leaflets urging their supporters to ‘rush’ the House of Commons.

Captured and returned to London, Crippen appears at Bow Street, is tried at the Old Bailey and hanged.

1916 – British diplomat Roger Casement tried for treason, espionage and sabotage against the Crown for dealing with Germany in connection with encouraging an Irish uprising. Executed at Pentonville prison, he was famously ‘hanged by a comma’ after his trial took an unpunctuated interpretation of treason laws, adopting the literal sense.

1928 – Radclyffe Hall’s lesbian novel, The Well of Loneliness, is deemed obscene by magistrates at Bow Street and remains banned until 1949.

1968 – East End gangsters Ronnie and Reggie Kray appear after a series of dawn raids by police in connection with charges including conspiracy to murder underworld characters George Cornell and Jack ‘The Hat’ McVitie.

2000 – Tory peer Jeffrey Archer is committed for trial on charges of perjury and perverting the course of justice.