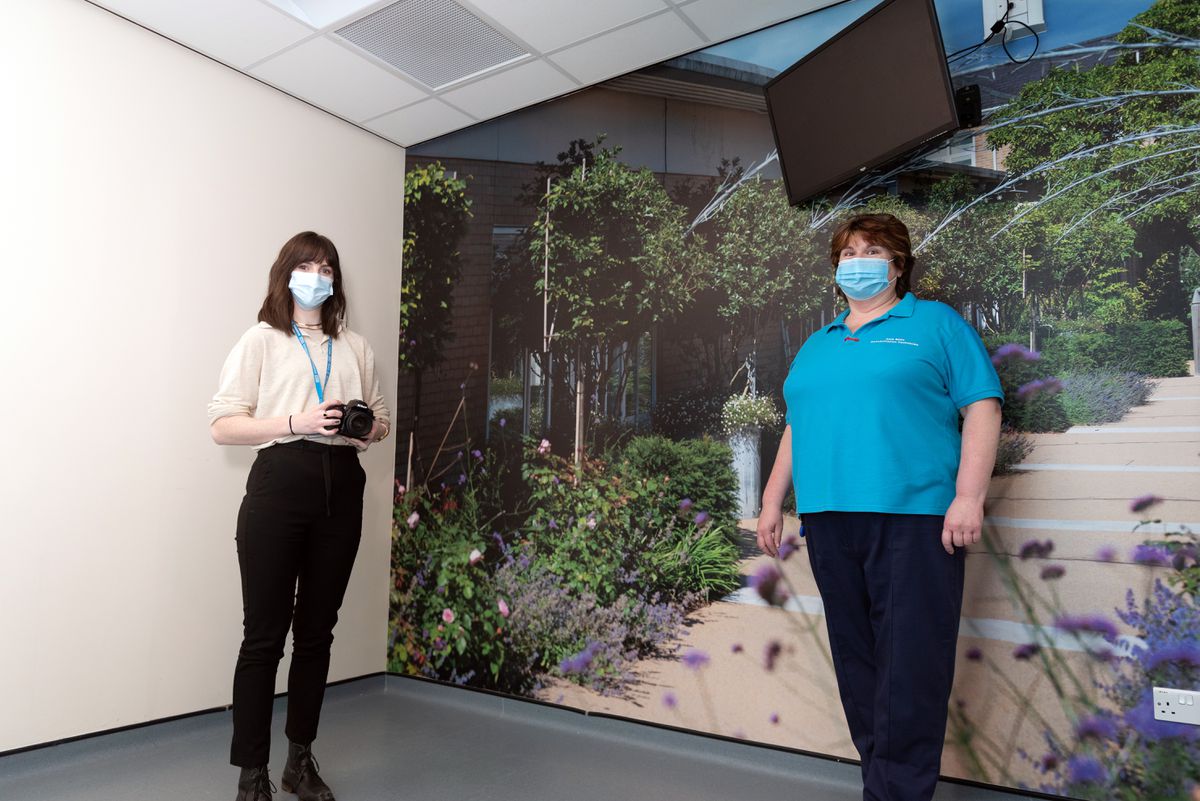 The majority of patient rooms and bays on Gladstone Ward – the rehabilitation ward in the Midland Centre for Spinal Injuries (MCSI) at The Robert Jones and Agnes Hunt Orthopaedic Hospital – have a view looking out onto Horatio’s Garden.

However, until recently there were a small number without a view of it.

That has all changed, thanks to the murals which were the brainchild of Kate Betts, a physiotherapy rehabilitation technician on MCSI.

She said: “We’re so lucky to have our stunning Horatio’s Garden, and thankfully most of our patients get a glimpse of it from their bed or bay but there were a few, who didn’t and some had commented on that.

“It felt unfair, particularly as the vast majority of our patients have long stays, typically between six to nine months – and that’s a long time to be staring at a blank wall for.”

Kate looked into what options would work best – and it was decided that a vinyl wall mural would be the way forward.

However, with no high definition images of the garden available, she called upon the skills of Nia Pritchard, one of the hospital’s medical photographers.

For Nia, meeting the requirements of the brief wasn’t as simple as taking a wide landscape shot of the garden.

Explaining the technique required, she said: “To create a panoramic image with a resolution at a high enough quality for the eight metre prints, I turned the camera upright and, while keeping the camera steady and level, rotated on the spot and shot a sequence of 10 to 15 portrait photographs.

“These images were then edited and stitched together in Photoshop to create one large, high resolution panoramic photograph.

“Kate really wanted our patients to feel like they could reach into the murals. So, to create this immersive experience, I used a telephoto lens, rather than a typical wide angle lens.

“Doing this compresses the scene, creating layers and depth that would hopefully allow the viewer to feel like they are within the garden rather than simply looking at a static photograph.”

The murals, which were funded by MCSI Charitable Funds, were installed last week by Now Group, based in Oswestry.

Kate said: “I’m so pleased with how the murals look, and our patients in the bays and side-rooms have all commented on how fantastic they look, so it’s already making a positive difference to them.

“A huge thank you to Nia for her hard work and skills in bringing these to life, and to the Now Group for a professional job, as always.

“Thanks must also go to our patients too, who helped us decide on the images we would use.”

Rebecca Warren, MCSI ward manager, added: “Our Horatio’s Garden is the jewel in our crown here on MCSI and knowing that all of our patients get a view of it, regardless of where their bed is, is really fantastic.

“I’d like to thank Kate, Nia, and the team at Now Group for making this amazing project happen. It’s going to make such a difference to our patients’ wellbeing, which is really wonderful.”

The garden, based outside MCSI, opened in September 2019, after an extensive fundraising drive and part-funded by the hospital’s League of Friends.

Horatio’s Garden is a national charity that creates and cares for stunning gardens in NHS spinal injury centres.

The garden at RJAH near Oswestry offers a sanctuary for patients with spinal cord injuries and was the fourth of its kind to open in the UK.