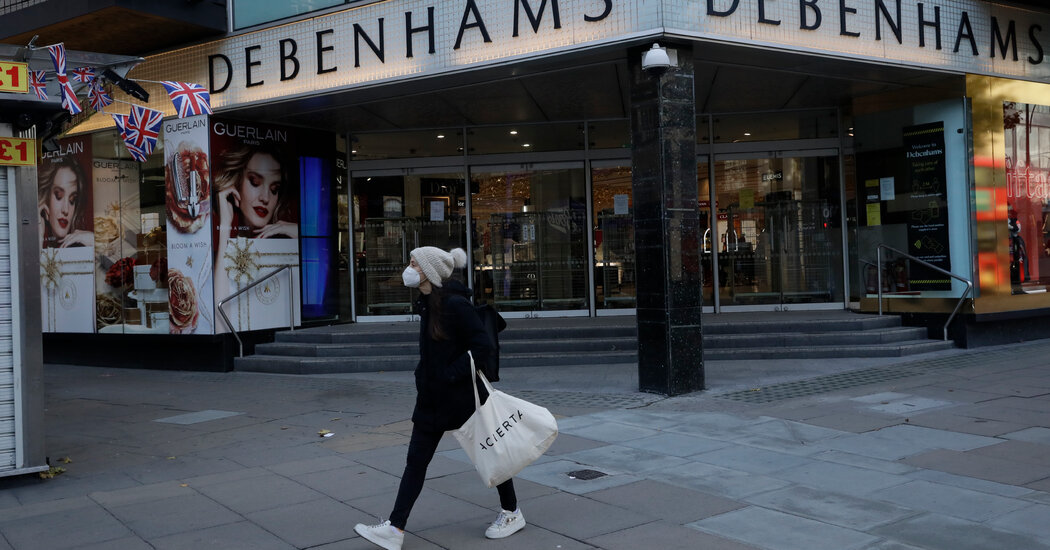 As the busiest shopping period of the year gets underway, two of Britain’s largest high-street retailers have collapsed.

Debenhams, a chain of department stores with about 12,000 employees, said on Tuesday that the company would begin to close down. The company would keep operating to clear out its stock and then stores would probably close early next year. Debenhams had already gone into administration, a form of bankruptcy protection, in April but efforts to find a buyer for the chain didn’t succeed. JD Sports, a sporting goods retailer, confirmed on Tuesday that it had dropped out of talks.

It’s the second domino to fall after the collapse on Monday of Arcadia Group, which owns brands including Topshop and Miss Selfridge. Arcadia’s brands have a heavy footprint in Debenhams, selling clothes through stands in the department stores. Arcadia has appointed Deloitte as an administrator to handle its finances because it failed to secure a multimillion-pound lifeline. It said none of the 13,000 staff were being laid off but more than 9,000 are already having their wages subsidized by the government’s furlough program.

“The retail house of cards on the high street is in danger of collapse,” said Susannah Streeter, an analyst, at Hargreaves Lansdown. She said Arcadia’s brands were among the most prominent in Debenhams, “so its collapse into administration clearly put the frighteners on management.”

For a time, Britain’s fashion retailers enjoyed a golden period and were seen as a source of national pride. Marks & Spencer was a byword for quality for decades, while the Debenhams evening wear department was a middle-class destination for all of life’s major celebrations. In the 2000s, Topshop — once considered the jewel in the crown of Philip Green’s Arcadia — was a genuine style authority.

But all these brands have suffered for years. Fast-fashion giants from overseas, like Zara from Spain and H&M from Sweden, started selling cheaper, trendier clothes. They were followed more recently by online-only upstarts such as Boohoo and Pretty Little Thing.

Last year, Debenhams went into administration, wiping out some shareholders, and Arcadia entered into a so-called company voluntary agreement in Britain, where it closed stores and renegotiated debt terms, and filed for bankruptcy in the United States.

But the pandemic has hastened their demise. Lockdowns have twice shuttered clothing stores in England and accelerated the e-commerce revolution. Old guard retailers and department stores that were too slow to invest in their online operations have found themselves grappling with the costly fallout of real estate empires visited by fewer and fewer people. This summer M&S said it planned to lay off 7,000 employees.

“Like Arcadia Group, Debenhams might have stood a better chance had its footprint of retail stores been smaller, but they were stuck with too many shops, on long leases they could not wriggle out of,” Ms. Streeter said.