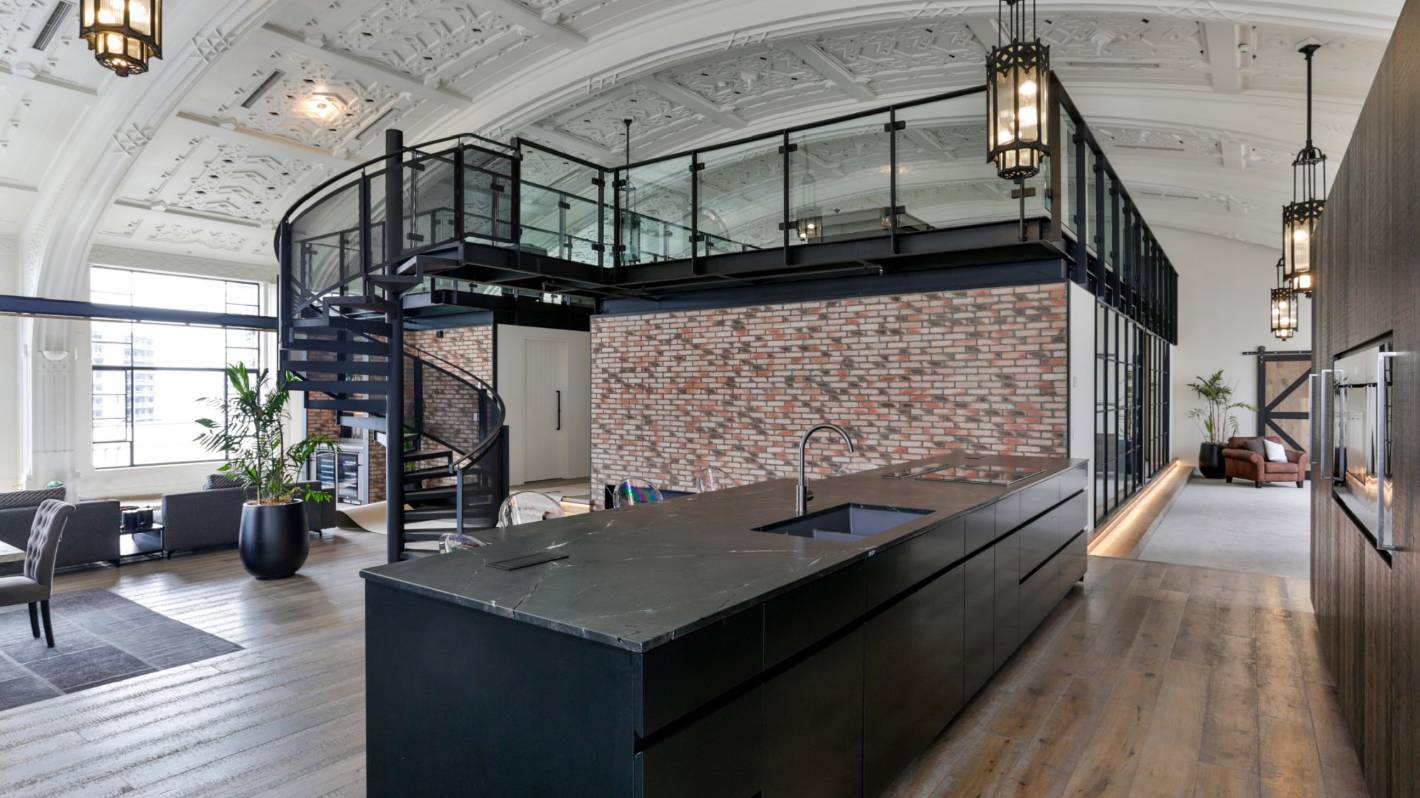 The story of the $6 million refurbishment of the heritage tearooms in the old Farmers department store building in Auckland – now the Heritage Hotel – was one of the most-watched shows on the recent Grand Designs NZ series.

We watched in awe as Steve and Bridget Varney “inserted” a 540 square-metre loft-style penthouse apartment beneath the soaring arched ceiling of the original Grand Tearoom – at no point could the build touch the sides of the building.

And this meant the kitchen needed to be freestanding in the middle of the space, which was a unique challenge for designer Sean Monk: “We couldn’t overpower the space, but we didn’t want to be wimpy at the same time. The clients wanted the kitchen to be a statement piece.”

“I was also aware that everything we built had to come up in the lift, so that helped determine the design.

“We decided on a dark finish for the entire kitchen, to connect it with the underlying theme of the rest of the new interior,” Monk says. “We also opted for strong industrial highlights and detailing, such as the steel I-beam legs on the built-in table, and a wrap-over, criss-cross frame detail on the tall units – again to fit in with the loft aesthetic.”

A combination of stained veneer with bandsaw markings, and plain painted surfaces was used for cabinet finishes, along with a leather-finished stone benchtop on the island. “Both provide a tactile experience and more visual engagement close-up.”

“Symmetry played a big part in the form of the kitchen,” Monk says. “The whole structure was centred as close as possible to the ‘rhythm’ of the decorative ceiling and heritage chandeliers. The ovens are centred on the tall units, and we used integrated fridge-freezers to keep the look of the kitchen as clean and simple as possible.”

The large island contains an induction hob with pop-up downdraft extractor and the main sink. The clients requested a seated eating area at the front of the island where the family can come together for day-to-day meals. Behind (and built into) the tall cabinetry is more storage, plus a small prep area for tea and coffee making, and a laundry.

The tearooms (and even the light pendants) were originally designed by American-born architect Roy Lippincott, who also designed other significant buildings around Auckland, including the University of Auckland’s ornate Arts Building. The architect worked for Frank Lloyd Wright and bought a similar aesthetic to many New Zealand projects.