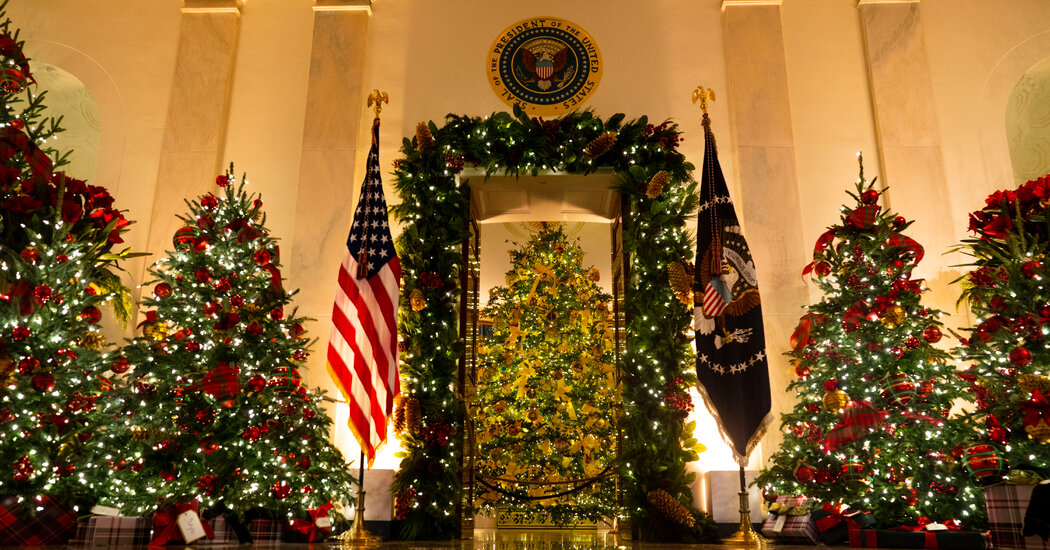 The first lady has overseen holiday decorations at the White House since 1961, when Jacqueline Kennedy hung ornaments of toys, birds and angels themed to “The Nutcracker” ballet on a Christmas tree in the Blue Room. This year was no different.

In a one-minute video posted to Twitter on Monday, Melania Trump unveiled this year’s theme, “America the Beautiful,” which she translated as green trees decorated with red, gold and silver ornaments and white lights, a style so traditional that it could grace the cover of Martha Stewart Living. The east colonnade this year features simple black urns holding plumes of foliage and greenery from each state and territory.

The bold aesthetic choices that drew so much flack and snarky memes in Christmases past are noticeably absent. There are no blood-red trees, as there were in 2018, which various news outlets called “creepy” and “deeply haunted.” There is nothing akin to the icy, underlit branches of 2017 that turned the East Colonnade into what some likened to a barren, dystopian landscape.

This year, a toy train — the “White House Express” — circles a wreath placed on a center table. Crafty ornaments bear the names of children from Maryland, Michigan and the Northern Mariana Islands. Other decorations celebrate “pioneers for gender equality,” as the first lady’s office put it, including the artist Georgia O’Keeffe.

This is Mrs. Trump’s last Christmas at the White House as first lady, and if her tree trimmings seem unimpeachable by design, that may be the point. She received an early lump of coal in her stocking in September, when her former adviser Stephanie Winston Wolkoff published a tell-all memoir, “Melania and Me.”

Among the newsworthy comments Mrs. Trump made in the book — and in secretly recorded conversations Ms. Winston Wolkoff released — was her complaint about the chore of the holidays, and her negative press coverage compared to her predecessor, Michelle Obama.

Mrs. Trump was heard on the recordings delivering a profanity-laced rant about “Christmas stuff” and decorations. “But I need to do it, right?” she added.

Mrs. Trump has also been tasked with spreading cheer at a time when daily deaths from Covid-19 are approaching tallies not seen since the spring and many Americans are canceling holiday plans out of fear of spreading the virus. Her decorations, including a snow-covered mini hospital and ornaments of a garbage truck, a nurse’s hat and a lab coat, nod to the pandemic and essential workers.

Early reviews of the decorations have been charitable.

CNN highlighted a tree in the Vermeil Room with ornaments featuring a portrait of President John F. Kennedy and sailboats, and another tree in the library celebrating the 100th anniversary of the 19th Amendment, which gave women the right to vote, noting, “Significant thought and detail went into the Americana decorations.”

The Independent wrote: “Ms. Trump and an army of volunteers put together a warmer, less edgy display that runs throughout the Executive Mansion.”

Even outlets that have been harshly critical of Mrs. Trump’s take on the holidays couldn’t work up the energy this year. Consider this tepid headline from Mashable: “Melania Trump unveils her final White House Christmas decorations and they’re fine.”

The website gave grudging respect to Mrs. Trump, and seemed almost disappointed not to carry on the recent holiday tradition, undertaken by much of the media, of skewering the White House Christmas design choices. “Playing it safe is probably a good strategy this year,” the article said. “This theme is harder to meme, for sure.”

Preparing for a Springtime Renovation Project