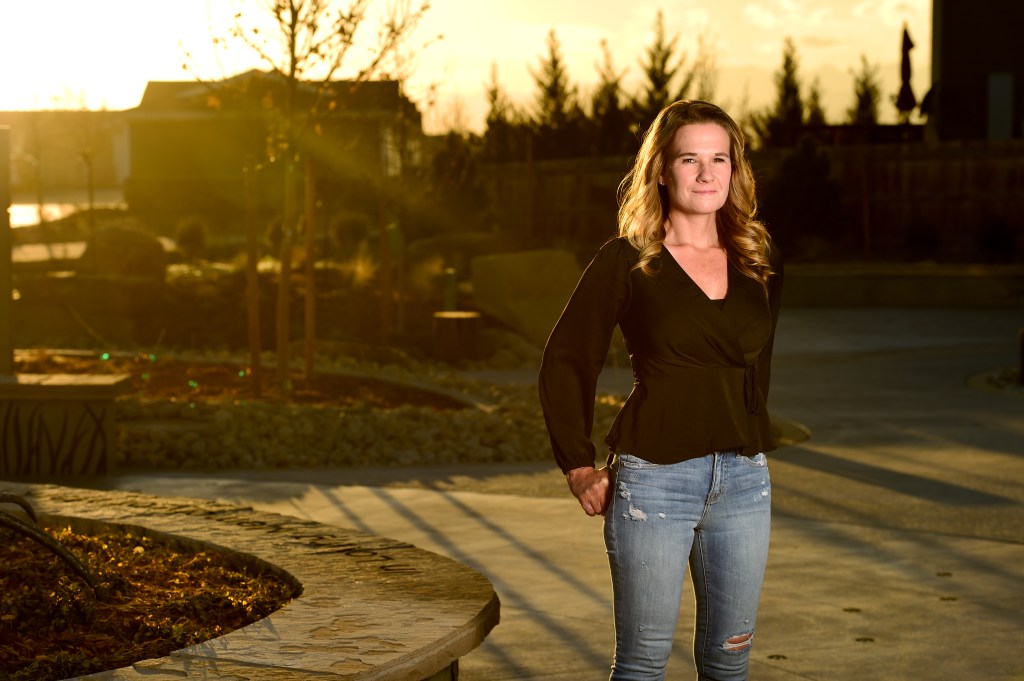 Now the notes that Erin Martinez heard her husband sing on May 24, 2003, are sand-blasted into concrete on the sidewalk at 6312 Twilight Ave. in Firestone, joining a nod to dozens of happy memories the couple had together. Spread out over a half-acre, the designs are part of Two Hunters Park.

The park opened Nov. 6 to pay tribute to Martinez and Joey Irwin, Erin Martinez’s brother. Both Irwin and Martinez died April 17, 2017, at 6312 Twilight Ave. when an uncapped flowline, operated by Anadarko Petroleum Corp, caused an explosion that destroyed the Martinez’s home. Erin Martinez and one of the couple’s two children were also injured in the explosion.

After three months recovering in the hospital, Erin Martinez wanted to do something worthwhile with the space that had been her home since 2015. Now, she said, the park will forever share the legacy of Irwin and Mark Martinez.

“I’m super-excited that the park is built and done,” Erin Martinez said. “It helps us to feel that Mark and Joey are a little more at peace. It puts a positive spin on something that was so ugly and tragic.”

Among native grasses and the shade of newly planted trees, numerous details are woven into the park’s landscape to honor Irwin and Mark Martinez.

The park’s name, Two Hunters Park, comes from one of their favorite hobbies: hunting together. Erin Martinez said her brother taught her husband to hunt. The pair had a particular affinity for pheasant hunting and fishing together. Sculpted pheasants can be seen at the park’s entrance, and there are also metal fish throughout the park.

Irwin and Mark Martinez each have a side of the park, where people can see mementos to their lives.

In the park’s center is an oak tree, where various things that the family did together can be found sand-blasted on the surface. There’s images of camping, fishing and chess, which Erin Martinez said her son, Nathan, often played with his dad. Erin and Mark Martinez’s children, Nathan, 15, and Jaelynn, 12, also put their handprints in the concrete.

After coming up with an idea to turn the space into a community park, Erin Martinez approached the town of Firestone with her plan.

Raelynn Ferrera, assistant to the town manager, served as the project manager for the park, helping Erin Martinez and her children bring their ideas for the park to life. Ferrera called it an honor to work with the family to create Two Hunters Park.

“Erin’s vision and dedication to turn the location of a tragic memory into a community space filled with details highlighting the family’s memories is a beautiful tribute honoring Mark Martinez and Joey Irwin as members of our community,” Ferrera said in an emailed statement.

Fire investigators determined the explosion was the result of odorless gas leaking from a severed underground pipeline into the home and through French drains and a sump pit in the basement. The abandoned 1-inch-diameter line was connected to an active well that came within 178 feet of the home, according to prior Times-Call reports.

Mark Martinez and Irwin, both 42, died while replacing the home’s water heater. They were both licensed plumbers.

Anadarko Petroleum Corp. in May 2017 announced it would be disconnecting 1-inch-diameter return lines from all vertical wells in Colorado, the same type of pipeline that was linked to the home explosion. The oil and gas company also reached a settlement in May 2018 with the family and victims in the explosion, which was not disclosed to the public.

Erin Martinez said she and her children live in Firestone on 17 acres free of oil and gas. Despite the tragedy, she said her children still wanted to be around their friends and family who live in town.

When Erin Martinez thinks about peoples’ reactions to the park, she wants it to bring them joy. For those who knew Irwin and Mark Martinez, she said she hopes they are able to smile when they remember happy memories with them. The park also will be a permanent reminder of the calling for oil and gas companies be held accountable for creating safe operations.

“I really believe that (the property) represents a tragic, hard place for a lot of people to go and drive by,” Erin Martinez said. “I’m hoping we can rewrite that chapter, and it can represent what our home represented: a loving place where everyone was welcome, lots of laughter and lots of smiles. I want that to be invoked again, because that’s what we shared with Mark and the kids there.”