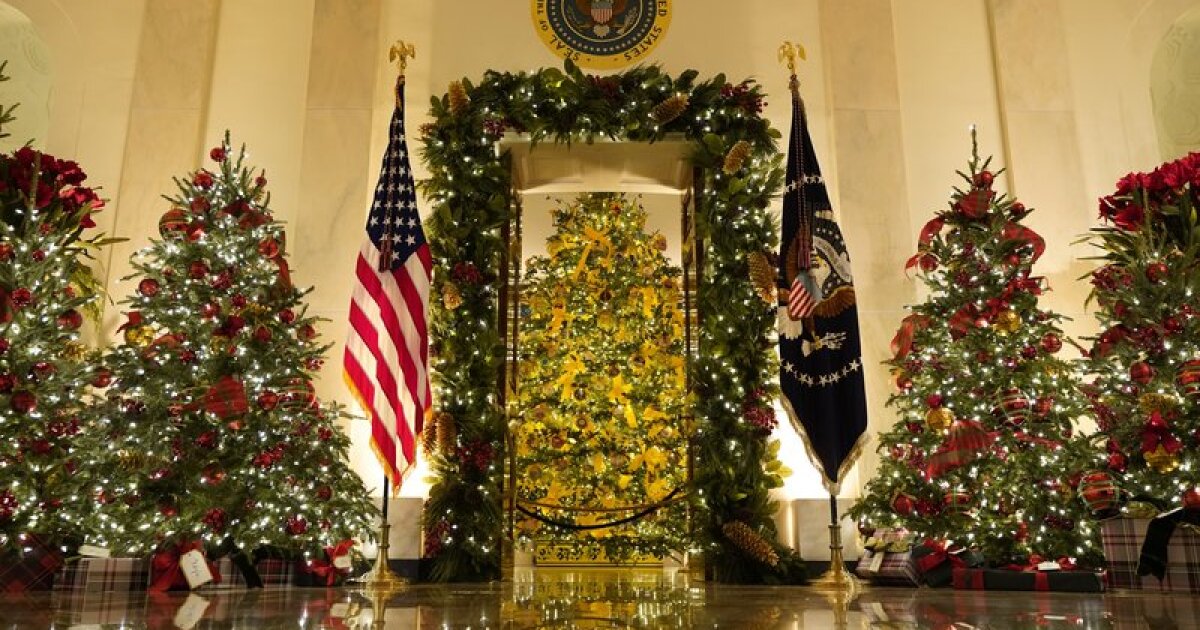 First responders and frontline workers being challenged by the deadly coronavirus pandemic are highlighted in White House Christmas decorations that also give a special nod to Melania Trump’s redesigned Rose Garden.

It’s the final Christmas in the White House for the Trump family, although the president continues to insist — despite evidence to the contrary — that he won the Nov. 3 election. President-elect Joe Biden will be sworn into office on Jan. 20.

The first lady said “America the Beautiful” is her theme for the decor, and that it was inspired by Americans’ shared appreciation “for our traditions, values and history.”

Workers on the front lines of a pandemic that has killed more than 266,000 people in the United States and infected more than 13 million others are recognized in the Red Room with a Christmas tree dotted with handmade ornaments, as well as other decorations around the parlor.

The gingerbread White House — a sweet confection made of more than 400 pounds (181 kilograms) of dough, gum paste, chocolate and royal icing — is on display in the State Dining Room and for the first time includes the Rose Garden, which the first lady recently renovated, and the First Ladies’ Garden.

Ornaments on the official White House Christmas tree in the Blue Room — a Fraser fir from Shepherdstown, West Virginia, that stands more than 18 feet (5.49 meters) tall — were designed by students who were asked by the National Park Service to depict what makes their states beautiful.

A buck and a crane are featured in three-dimensional art hanging in windows of the Green Room, where American wildlife is the highlight. Classical urns lining an East Wing walkway hold groupings of foliage from different regions of the country.

Trees and other decorations in the East Room feature planes, trains and automobiles — including models of Air Force One — in a nod to triumphs in innovations and technology. Wrapped gifts beneath decorated trees lining the Cross Hall bear tags that say “peace,” “love,” “faith” and “joy.”

Monday’s unveiling of the Christmas decor came weeks after Mrs. Trump was heard on an audio recording using profanity as she complained about the pressure of having to decorate for the holiday in the past. The recording of the July 2018 conversation was made and released to CNN by Stephanie Winston Wolkoff, who was fired from the White House earlier that year.

Wolkoff published a tell-all book about her friendship and breakup with Mrs. Trump, whom Wolkoff blames for not defending her after questions arose about spending for Trump’s 2017 inauguration, which Wolkoff helped produce.

The library is decorated to recognize the 100th anniversary of the 19th Amendment, giving women the right to vote. Stockings for the president, first lady and their 14-year-old son Barron hang from a fireplace in the room where presidential china patterns are displayed.

After previewing the decorations for the media, the White House on Monday planned the first of many holiday receptions that are expected to be smaller in size given coronavirus concerns.

A few miles north of the White House, the wrapping also came off the Christmas decorations at Vice President Mike Pence’s official residence on the grounds of the Naval Observatory.

Karen Pence said “Old Fashioned Christmas” is their theme. The home is decorated with natural and rustic elements, including pine cones, seasonal berries, burlap, galvanized aluminum and plaid ribbon, along with seven Christmas trees and 35 wreaths.